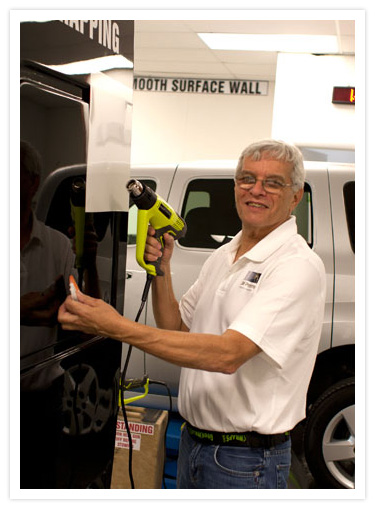 At age 16 Kenny Calman was already an accomplished upholstery journeyman working with his family for large resorts, casinos, and car dealerships in Las Vegas and Southern California. As an inventor he was granted his first patent for an electronic device at age 18.

Kenny later switched careers and became an FAA flight instructor in Fort Lauderdale, Florida in the early 80’s. As a helicopter, fixed wing, and instrument flight instructor, Kenny completed intensive training and recurrent training as well as a rigorous psychological assessment in order to earn and retain his flight instructor license. In the more than 6,000 teaching hours Kenny accumulated over the years–in all make and model aircraft–all the students that he recommended for FAA testing, passed their written and flight exams on their initial attempt and became professional pilots.

While running his helicopter flight school, Kenny began work as a Hollywood stuntman. His skills as an aerial stuntman, pilot, and precision driver, led him to be part of major Hollywood productions. His credits include the hit series Miami Vice, Renegade, Pensacola: Wings of Gold, Silk Stalkings, several Hallmark Hall of Fame productions and movie franchises such as James Bond, Police Academy, and Fast and Furious, among others.

After his stint in Hollywood, where at that point he had banked over 10,000 personal flight hours, Kenny returned to Florida and started a graphic design and print studio with his wife, Kathy. They narrowed their focus to custom vehicle wraps, and it was during their many installations that the lack of quality tools for this new industry became obvious. Kenny invented tools for their in-house use which lead to the development of a complete line of installation tools to improve the ease, quality and efficiency of their installations. Once the tools were proven in the field, they were offered for sale to the industry and Geek Wraps tools grew to become the preferred brand for professional installers worldwide.

Drawing from his past skills as an upholsterer, flight instructor, and ultimately a vehicle wrap installer, as well as the sole inventor of the Geek Wraps line of installation tools, Kenny Calman is currently part of a select group of 3M authorized trainers and testers worldwide. He’s been training and administering testing for 3M Preferred Graphics Installer program at Geek Wraps University in Florida, one of only a handful of authorized training and testing centers in the world.

Kenny is a studied instructor, having completed rigorous training and testing in the psychology and fundamentals of instructing to become an FAA flight instructor of jet helicopters and fixed wing aircraft. He brings this instructing knowledge to the wrap industry.